From atop Mauna Kea, UH scientists are finding exoplanets, boosting the chance of discovering alien life 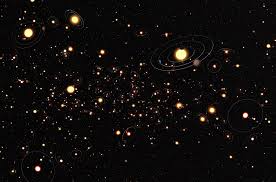 University of Hawaii astronomers were part of a globe-spanning team that recently announced the discovery of more than 100 new planets orbiting stars beyond our own solar system.

These new exoplanets, confirmed in part through observations made from Hawaii-based telescopes, reveal an unprecedented range of diversity in the places and ways in which planets can form. And the study’s findings further raise the probability of the existence of extraterrestrial life.

“One of my favorite quotes comes to mind, from Arthur C. Clarke,” said Evan Sinukoff, a co-author of the study and a graduate student at the UH Manoa Institute for Astronomy. “‘Two possibilities exist: Either we are alone in the universe or we are not — both are equally terrifying.’” This artist’s concept shows a crop of more than 100 planets, discovered by NASA’s Kepler Space Telescope. Those planets include four in Earth’s size range orbiting a single dwarf star.

“We all know how easily fear can motivate people,” he laughed, then added, “What keeps me going into work every day is my desire for exploration and the notion that I’m contributing a chapter to a journey thousands of years in the making … and coffee.”

The Flea And The Street Lamp

To find these new planets, an international group of astronomers collaborated on a specific set of observations made with NASA’s orbiting Kepler Space Telescope, launched in 2009.

Sinukoff said they started by taking measurements of more than 10,000 stars, in five different patches of the sky, each of which they monitored for three months. They looked for specific changes in a star’s brightness, potentially caused by an exoplanet passing between the star and Kepler’s 6.4-foot diameter lens.

“These dimming events are subtle, comparable to the dimming of a street lamp when a flea passes in front,” Sinukoff explained. A wide angle view of the 10-meter Keck Observatory mirror. The observatory was one of four telescopes atop Mauna Kea used to identify 104 new exoplanets, as part of NASA’s K2 mission.

Then astronomers took a closer look at the planetary candidates, using four telescopes atop Mauna Kea: the two Keck telescopes, NASA’s Infrared Telescope Facility, and Gemini North. The different instruments and capabilities of each telescope were used to take more precise measurements.

“Each provides a different piece of the puzzle,” he said, adding that telescopes in California, Arizona and Chile also were tapped in the effort.

Sinukoff said the different observations were divided among many team members, based on both experience and access to various telescopes. Some were dedicated to managing the complex dance of securing observing time and coordinating observations.

Among the astronomers contributing to the discovery were many from UH, including Sinukoff, Andrew Howard, B.J. Fulton, Christoph Baranec, Mike Liu and Kimberly Aller.

Less than three decades ago, the existence of exoplanets was still largely theoretical, despite centuries of debate among stargazers.

Today, more than 3,400 exoplanets have been found in more than 2,500 planetary systems. The vast majority were detected in data collected by Kepler.

The telescope’s singular utility in discovering exoplanets is especially remarkable given that the $600 million instrument was effectively crippled three years ago.

“The discovery of these planets was only made possible by a catastrophic failure onboard NASA’s Kepler Space Telescope,” Sinukoff explained. “In 2013, four years into the Kepler mission, the spacecraft effectively broke, rendering it unable to point at the same patch of sky where it had found thousands of planets.”

“Kepler lost some of its reaction wheels, needed to keep it pointing at one part of the sky,” added Roy Gal, an assistant astronomer at UH and outreach coordinator for the institute. “So the K2 mission was conceived, where the same spacecraft now looks at multiple regions but for shorter stays.”

In order to make this happen, Sinukoff said, engineers devised a plan to stabilize the telescope by using the relatively faint force exerted on its solar panels by the sun’s light. But that stabilization was only possible through aligning the telescope along the ecliptic, “the same slice along which the sun and planets in our solar system pass.”

Fortunately, the patches of sky visible along that plane still encompass thousands of stars, around which hundreds of planets have since been detected.

Sinukoff pointed out that focusing exoplanet discovery efforts along the ecliptic has another potential benefit.

“If you were standing on one of those planets, your view of our solar system would be at just the right angle to see the planets in our solar system pass in front of [our] sun,” he said. “In other words, we are finding planets on which alien life would be most likely to detect us.”

The Truth is Out There

Although the existence of alien life will be hard to prove, it’s becoming increasingly probable.

“We already know, from work from this team and others, that probably more than half of stars have planets; and a pretty good fraction of these have planets in their habitable zones,” Gal said. “But we did not always suspect planetary systems were common — guesses ran from 1 percent to 100 percent of stars hosting planets.”

“Now we know the answer, and they are more common than I think most astronomers expected,” he said.

“We also did not expect to find such a diversity of solar systems,” Sinukoff added. “Astronomers are finding planets very close to their host stars, new types of planets …  planets twice the size of Earth and hotter than 1,000 degrees, planets orbiting more than one star, like Tatooine.”

In all that diversity, astronomers now believe one in every five sun-like stars are orbited by planets that are similar in size and temperature to Earth, he said. That’s “many billions of these planets in our galaxy alone.”

“We are now moving into the next stage, figuring out if the planets in the habitable zones are, in fact, habitable,” Gal explained. A key criteria would be the presence of water.

“What’s especially exciting is that we’re finally developing tools that will be capable of detecting water on Earth-size planets,” Sinukoff said. “This will happen in our lifetimes.”

But Gal noted that Mars and Venus have water and are not especially friendly to life.

“We really need the next big optical telescopes like TMT to get sufficiently detailed spectroscopy to identify possible bio-signatures” in the spectrum of light detected from exoplanets, he said, referring to the long-delayed Thirty Meter Telescope project planned for the top of  Mauna Kea, on the Big Island. “That’s the frontier.”