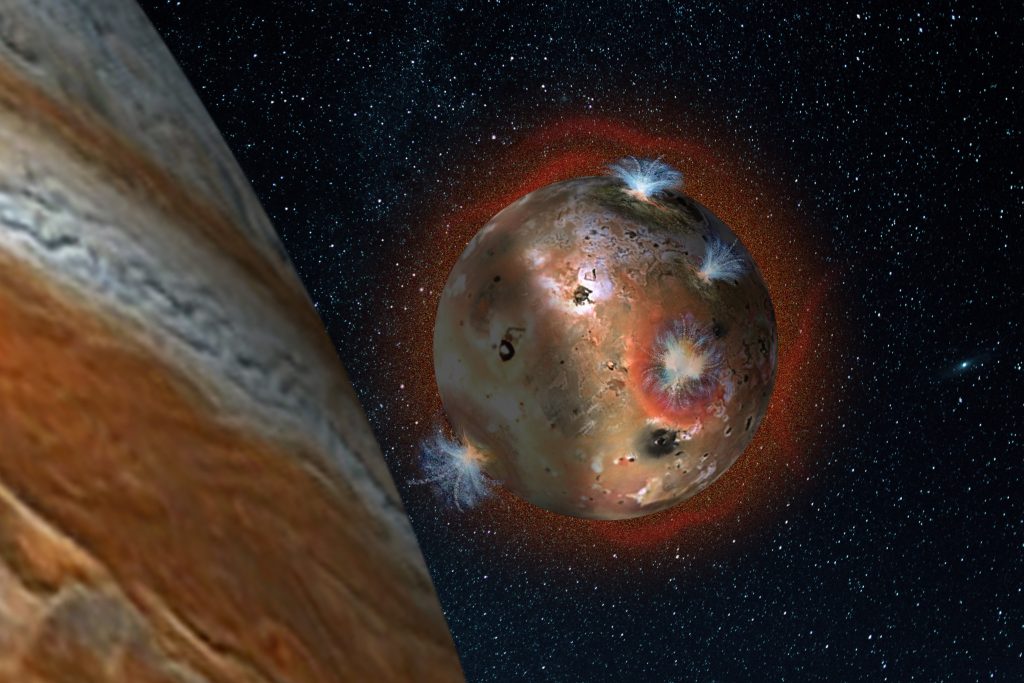 Gemini observations show that the thin atmosphere of Jupiter’s moon Io undergoes dramatic changes during frequent eclipses with the giant planet. The following press release, issued by the Southwest Research Institute, explains how the dramatic changes in temperature cause the moon’s atmosphere to collapse.

A study led by SwRI’s Constantine Tsang concluded that Io’s thin atmosphere, which consists primarily of sulfur dioxide (SO2) gas emitted from volcanoes, collapses as the SO2 freezes onto the surface as ice when Io is shaded by Jupiter. When the moon moves out of eclipse and ice warms, the atmosphere reforms through sublimation, where ice converts directly to gas.

“This research is the first time scientists have observed this phenomenon directly, improving our understanding of this geologically active moon,” said Tsang, a senior research scientist in SwRI’s Space Science and Engineering Division.

The findings were published in a study titled “The Collapse of Io’s Primary Atmosphere in Jupiter Eclipse” in the Journal of Geophysical Research. The team used the eight-meter Gemini North telescope in Hawai’i with the Texas Echelon Cross Echelle Spectrograph (TEXES) for this research.

Data showed that Io’s atmosphere begins to “deflate” when the temperatures drop from -235 degrees Fahrenheit (-148 ℃) in sunlight to -270 degrees Fahrenheit (-168 ℃) during eclipse. Eclipse occurs 2 hours of every Io day (1.7 Earth days). In full eclipse, the atmosphere effectively collapses as most of the SO2 gas settles as frost on the moon’s surface. The atmosphere redevelops as the surface warms once the moon returns to full sunlight.

“This confirms that Io’s atmosphere is in a constant state of collapse and repair, and shows that a large fraction of the atmosphere is supported by sublimation of SO2 ice,” said John Spencer, an SwRI scientist who also participated in the study. “Though Io’s hyperactive volcanoes are the ultimate source of the SO2, sunlight controls the atmospheric pressure on a daily basis by controlling the temperature of the ice on the surface. We’ve long suspected this, but can finally watch it happen.”

Tsang and Spencer’s observations occurred over two nights in November 2013, when Io was more than 420 million miles (676 million km) from Earth. On both occasions, Io was observed moving in and out of Jupiter’s shadow, for a period about 40 minutes before and after eclipse.

Io is the most volcanically active object in the solar system. Tidal heating, the result of Io’s gravitational interaction with Jupiter, drives the moon’s volcanic activity. Io’s volcanoes emit umbrella-like plumes of SO2 gas extending up to 300 miles (483 km) above the moon’s surface and produce extensive basaltic lava fields that can flow for hundreds of miles.

This study is also timely given that NASA’s Juno spacecraft entered Jupiter orbit on July 4th. “Io spews out gases that eventually fill the Jupiter system, ultimately seeding some of the auroral features seen at Jupiter’s poles,” Tsang said. “Understanding how these emissions from Io are controlled will help paint a better picture of the Jupiter system.”