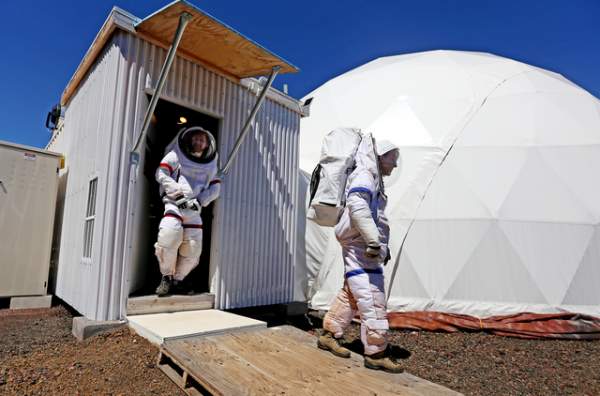 Six scientists will become the first to complete a yearlong Mars simulation in the United States when they exit a small dome Aug. 28 on Mauna Loa.

For nearly 365 days, the crew has seen the outside world only through a small porthole or through the lens of their spacesuits, which they must wear to venture outside.

At 8,200 feet above sea level, the landscape mimics Martian soil somewhat, with hardly any vegetation to be found.

“They’re doing OK as far as we can tell,” said Kim Binsted, principal investigator for the Hawai‘i Space Exploration Analog and Simulation.

The University of Hawaii runs the NASA-funded study.

Three other simulations have been held in the dome, located in a former quarry, for four- and eight-month durations.

Each scientist works on research projects during their stay and learns how to manage limited resources while avoiding personal conflicts in isolation.

Any communication with the outside world is put on a 20-minute delay, the length of time it would take to relay messages to and from the red planet.

Binsted said the only longer simulation held was a 520-day mission in Russia that mimicked a trip to Mars.

HI-SEAS is more focused on what a crew will do once they get there.

The crew will be provided fresh fruit and other food not available during the simulation after they leave the dome.

“They are clamoring to get into the ocean,” Binsted said.

“I think they will enjoy having a beer as well.”

Binsted said HI-SEAS will host two more eight-month simulations, with the next one starting in January.

Applications can be found at www.hawaii.edu.