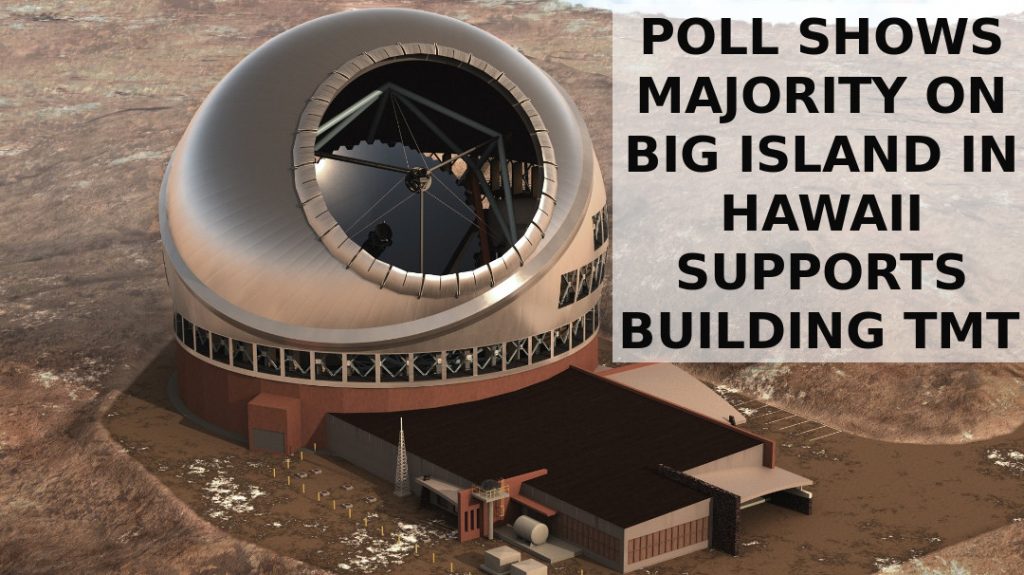 Update:  The polling done by Ward Research was done for n=404 respondents, maximum margin of error of +/- 4.9% at 95% confidence level.  The sample chart shown below of Caucasian, Hawaiian and Japanese only total 299 because there were other ethnicities not shown the chart purely for simplicity reasons.  Those excluded 105 respondents excluded: Chinese, 1%; Filipino, 9%; Mixed, 9%; Other, 4%; and refused to identify, 3%.

The results of a new scientific poll show that Hawai‘i Island residents support the construction of the Thirty Meter Telescope by a nearly 2-to-1 margin.

The public opinion poll conducted in July 2016 by Ward Research Inc. shows that 60% of Hawai‘i Island’s residents support moving ahead with construction of the TMT project, with 31% opposed.

In a previous scientific poll taken in October 2015, 59% of Hawai‘i Island’s residents supported moving ahead with TMT construction, while 39% were opposed to it. 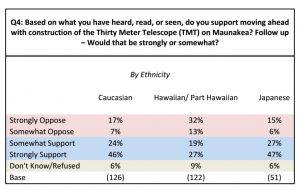 “It was important for us to understand how Hawai‘i Island residents feel about the project, and the latest poll results demonstrate that opposition to TMT on Hawai‘i Island is decreasing,” said TMT Executive Director Ed Stone. “That’s significant and we are most grateful that the community’s support of the project remains high. The findings also show that the general public on Hawai‘i Island understands the benefits TMT will bring in terms of Hawaii’s economy and education, both of which are very important to TMT.”

“As a Hawaiian, I strongly support the Thirty Meter Telescope because it affords us the ability to share new discoveries of stars, planets and science with our children and grandchildren, keeping in line with the traditions of our ancient Hawaiian navigators,” said Kirstin Kahaloa, executive director, Kona-Kohala Chamber of Commerce. “Think about it. The best science in the world happening on the best mountain in the world right here in Hawai‘i. How can you not get excited about that? The time has come for everyone including Hawaiians to stand up and support TMT.”

Maunakea remains the preferred choice for the location of TMT and the project is continuing to pursue a permit to build on that site. TMT is simultaneously evaluating alternative sites, should the Hawai‘i option not prove feasible.

“We hope that permitting activities continue apace in Hawai‘i so that TMT can be under construction on Maunakea by April 2018,” Stone added. An artist’s rendering of the Thirty Meter Telescope at sunset. TMT photo.

The Thirty Meter Telescope Project has been developed as a collaboration among Caltech, UC, the Association of Canadian Universities for Research in Astronomy (ACURA), and the national institutes of Japan, China, and India with the goal to design, develop, construct, and operate a thirty-meter class telescope and observatory on Mauna Kea in cooperation with the University of Hawai‘i (TMT Project).

The TMT International Observatory LLC (TIO), a nonprofit organization, was established in May 2014 to carry out the construction and operation phases of the TMT Project. The members of TIO are Caltech, UC, the National Institutes of Natural Sciences of Japan, the National Astronomical Observatories of the Chinese Academy of Sciences, the Department of Science and Technology of India, and the National Research Council (Canada); the Association of Universities for Research in Astronomy (AURA) is a TIO Associate. The Gordon & Betty Moore Foundation has provided major funding.

For more information about the TMT project, visit tmt.org.