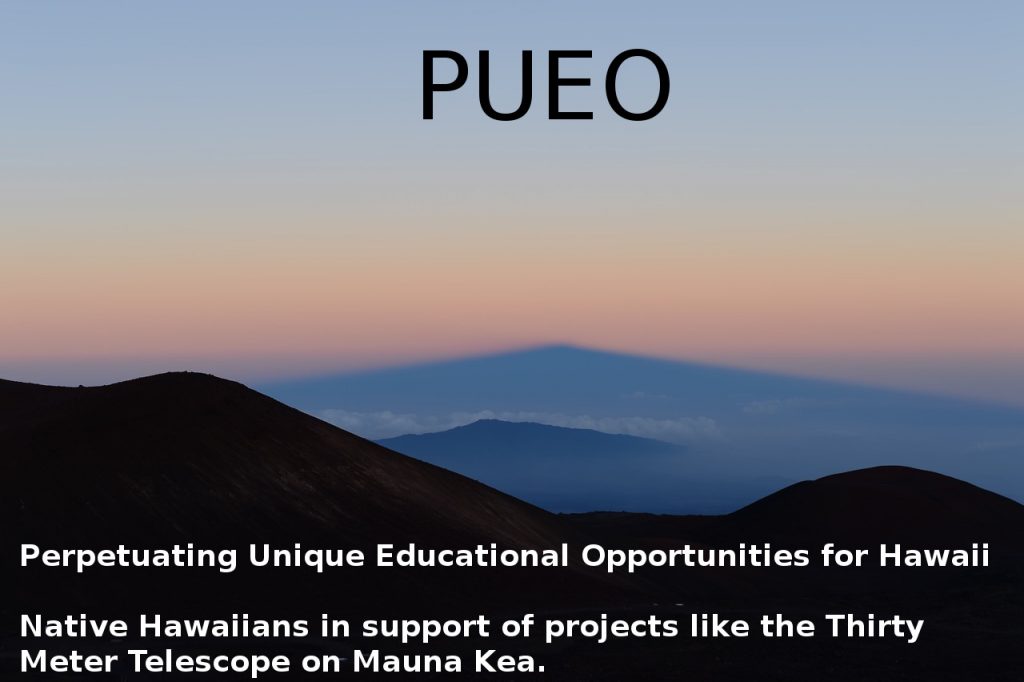 Our group, Perpetuating Unique Educational Opportunities (PUEO), is made up of highly respected members of the Hawaiian community.

We represent folks who believe our children are as competent as any in the world. We are about keiki education.  We are also about making sure our culture is not left behind as we move into the future.

We can multitask. The Big Island has the lowest median family income, the highest rate of homelessness and the highest suicide rate. PUEO recognizes that education is the great equalizer. We believe through education, taking advantage of the resources around us and integrating our culture into what we learn, we can not only do better, we can lead the world.

PUEO stepped up when we learned that Hokukea, the small University of Hawaii at Hilo teaching telescope, would go from Mauna Kea, the best viewing site in the world, down into Hilo, the rainiest city in the world.  Why?

We also felt we needed to support astronomy in general and the Thirty Meter Telescope (TMT) in particular.
That is why PUEO entered the contested-case hearing supporting the TMT, which has a track record of doing the right thing.

The president of TMT, Henry Yang, is a humble man of the people, someone you can do business with on a handshake.

Our people came from the south. Though they had not seen the northern skies, they used their knowledge of the stars and launched their canoes. Today, on Mauna Kea, we are in these northern skies wanting to combine our knowledge with those in the southern skies for the good of humanity.

Fighting against astronomy, banning astronomy from Mauna Kea, is as short-sighted as burning the oars of the canoe Hokule‘a because we need firewood.

The TMT is made up of the Pacific Rim nations of Canada, the U.S., Japan, India and China. What better purpose can we aspire to than cooperation among nations, rather than war? And what better place for cooperation than on Mauna Kea, in Hawaii, the land of aloha?

But it is not about us, the elders, it’s about the youngsters. What kind of world will we leave them?
It’s about attitude. Like the Hokule‘a, we want to leave a legacy not of “No can,” but rather “Can!”
Will we listen to the thousand reasons why “No can”? Or will we find the one reason why “Can”?
Will we lean forward toward discovery? Can our people be the leaders in the world?

PUEO is bringing students to tour the various telescopes. PUEO is also working to make the voyaging canoe Hokualaka‘i seaworthy. We are reaching for an Earth-sky connection.

When the new UH telescope is functional, PUEO will have students operating it from Hilo.
On Sept. 24, PUEO will gather at Palekai in Keaukaha, Big Island. The university’s Department of Astronomy will set up booths so the young ones can see what is offered.

We can do this. President Barack Obama, leader of the most powerful nation on Earth, is from Hawaii. Professor Jennifer Doudna, who discovered the game-changing CRISPr gene editing technology, is a Hilo High graduate. Dennis Gonsalves, father of the GMO rainbow papaya, is from Kohala. The Hokule‘a is from Hawaii.
It’s about attitude.