Universe’s Expansion is Faster Than Expected 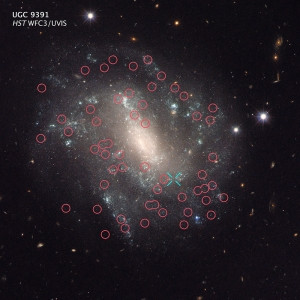 MAUNAKEA, Hawaii – Astronomers using the W. M. Keck Observatory on Maunakea, Hawaii have obtained the most precise measurement yet of how fast the universe is expanding at the present time, and it doesn’t agree with predictions based on other data and our current understanding of the physics of the cosmos. The discrepancy – the universe is now expanding 9 percent faster than expected — means either that measurements of the cosmic microwave background radiation are wrong, or that some unknown physical phenomenon is speeding up the expansion of space, the astronomers say. The results, using data from Keck Observatory and the Hubble Space Telescope, will appear in an upcoming issue of The Astrophysical Journal.

“If you really believe our number – and we have shed blood, sweat and tears to get our measurement right and to accurately understand the uncertainties – then it leads to the conclusion that there is a problem with predictions based on measurements of the cosmic microwave background radiation, the leftover glow from the Big Bang,” said Alex Filippenko, a UC Berkeley professor of astronomy and co-author of a paper announcing the discovery.

Using the Keck-I 10-meter telescope in Hawaii, Filippenko’s group measured the chemical abundances of gases near the locations of Cepheid variable stars in the nearby galaxies hosting Type Ia supernovae. This allowed them to improve the accuracy of the derived distances of these galaxies, and thus to more accurately calibrate the peak luminosities of their Type Ia supernovae.

“We’ve done the world’s best job of decreasing the uncertainty in the measured rate of universal expansion and of accurately assessing the size of this uncertainty,” said Filippenko, “yet we find that our measured rate of expansion is probably incompatible with the rate expected from observations of the young universe, suggesting that there’s something important missing in our physical understanding of the universe.”

The cause could be the existence of another, unknown particle – perhaps an often-hypothesized fourth flavor of neutrino – or that the influence of dark energy (which accelerates the expansion of the universe) has increased over the 13.8 billion year history of the universe. Or perhaps Einstein’s general theory of relativity, the basis for the Standard Model, is slightly wrong.

“This surprising finding may be an important clue to understanding those mysterious parts of the universe that make up 95 percent of everything and don’t emit light, such as dark energy, dark matter and dark radiation,” said Nobel Laureate Adam Riess, the leader of the study from the Space Telescope Science Institute and The Johns Hopkins University, both in Baltimore, Maryland. Riess is a former UC Berkeley post-doctoral fellow who worked with Filippenko.

A few years ago, the European Space Agency’s Planck observatory – now out of commission – measured fluctuations in the cosmic background radiation to document the universe’s early history. Planck’s measurements, combined with the current Standard Model of physics, predicted an expansion rate today of 66.53 (±0.62) kilometers per second per megaparsec. A megaparsec equals 3.26 million light-years.

Previous direct measurements of galaxies pegged the current expansion rate, or Hubble constant, between 70 and 75 km/sec/Mpc, give or take about 5-10 percent – a result that is not definitely in conflict with the Planck predictions. But the new direct measurements yield a rate of 73.24 (±1.74) km/sec/Mpc, an uncertainty of only 2.4 percent, and clearly incompatible with the Planck predictions, Filippenko said.

The team, several of whom were part of the High-z Supernova Search Team that co-discovered the accelerating expansion of the universe in 1998, refined the universe’s current expansion rate by developing innovative techniques that improved the precision of distance measurements to faraway galaxies.

The team looked for galaxies containing both a type of variable star called a Cepheid and Type Ia supernovae. Cepheid stars pulsate at rates that correspond to their true brightness (power), which can be compared with their apparent brightness as seen from Earth to accurately determine their distance and thus the distance of the galaxy. Type Ia supernovae, another commonly used cosmic yardstick, are exploding stars that flare with the same intrinsic brightness and are brilliant enough to be seen from much longer distances.

“If we know the initial amounts of stuff in the universe, such as dark energy and dark matter, and we have the physics correct, then you can go from a measurement at the time shortly after the Big Bang and use that understanding to predict how fast the universe should be expanding today,” said Riess. “However, if this discrepancy holds up, it appears we may not have the right understanding, and it changes how big the Hubble constant should be today.”

Aside from an increase in the strength with which dark energy is pushing the universe apart, and the existence of a new fundamental subatomic particle – a nearly speed-of-light particle called “dark radiation” – another possible explanation is that dark matter possesses some weird, unexpected characteristics. Dark matter is the backbone of the universe upon which galaxies built themselves into the large-scale structures seen today.

Keck Observatory is a private 501(c) 3 non-profit organization and a scientific partnership of the California Institute of Technology, the University of California and NASA.